Labour Day: the celebration and the struggle continue onshore — and off 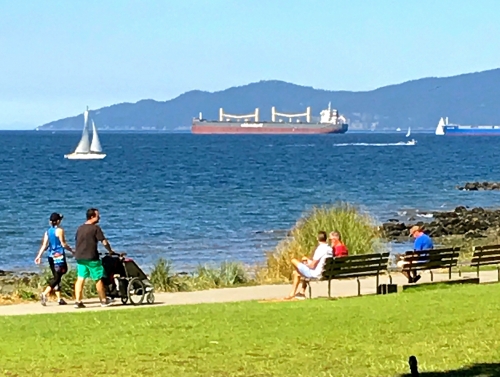 Along English Bay in Vancouver, those workers who managed to get the holiday off were soaking in a last bit of summer sun. Kids were playing, dogs were hanging out in the shade, sailboats were cruising. We marked our respect for workers with a day celebrating them, and by giving as many as possible some time free of the daily grind. It’s not a perfect world here yet, but as we fight on, we also stop once a year to salute the working people who have built, and continue to build, our country and our communities.

And then there’s that ship in the background. The Gertrude Oldendorff.

It’s also what respect looks like — when workers get none.

There’s an Indonesian seafarer on board that bulk carrier. He’s been aboard for months. He’s been available seven days a week and done whatever he was asked to do.

When he came aboard, the ship was covered by an ITF collective agreement through the German union Verdi. In July, the owners — Oldendorff Carriers — decided to terminate the collective agreement. Termination meant  the company was free to roll back things like wages, sick pay and compensation for serious illness or injury. It also meant the seafarers onboard no longer have a legal representative.

During the course of his contract, the Indonesian seafarer developed eye trouble. When the ship hit the port of Qinhuangdao in China, he was allowed to see a doctor. He was diagnosed with optic neuritis and told that he should be repatriated for treatment, and failing that, flown home from the next port. Oldendorff chose to not repatriate him from China. They left him aboard for the slow crossing from China to Canada. Just outside Canadian territorial waters, the engines were stopped and the ship was allowed to drift for nearly three days — presumably to save the anchorage fees it would have to pay if it arrived in Canada ahead of its scheduled berthing.

Someone sitting at a desk in Germany — a country where accommodation of workers’ rights is, in general, progressive and strictly adhered to — decided this worker’s eye could wait.

Peter Lahay, the ITF’s Canadian coordinator, heard from the worker by email, and got in contact with the shipowners. Lahay pleaded with them to bring the vessel in and get the man medical attention. The company acknowledged they had sick seafarer aboard but said only that they would eventually send him home. That wasn’t good enough. Lahay told them that because the collective agreement had been terminated and he had no formal agreement relationship with the company, he would have to involve Transport Canada. It wasn’t a tough decision for Lahay. In private, other crew had noted the callous treatment they had received at the hands of the company.

When the vessel finally arrived in English Bay, it was 2 p.m. on Friday of the Labour Day weekend here. Transport Canada marine safety inspectors — who enforce the Maritime Labour Convention — hopped a launch to the ship and investigated. We thank them and we offer them our respect. They gave up their own holiday to stand up for a fellow maritime worker. They provided the basic consideration that we in Canada have come to expect of each other.

As of Monday afternoon, the worker was still aboard. Had the ship come in a week earlier, the company could have dropped anchor, sent a launch to get their worker ashore and had him in front a doctor at the mariners’ clinic the same day. At this point, a full month after the initial diagnosis, we can only hope that the seafarer regains full use of his eye and suffers no permanent damage.

Should he lose sight in one eye, or even suffer significantly impaired vision, his career at sea is over. And earning a living at home in Indonesia will be precarious at best.

His career might be over anyway. Even should he recover, he faces blacklisting by the company for contacting the ITF and for insisting on treatment that might save his sight.

Today, we salute maritime workers everywhere. We celebrate the respect that we have won to date, often at huge personal cost. We renew our resolve to protect it. And we join hands with workers everywhere in vowing to fight on for fair wages, safe working conditions and peaceful lives for all of us.

One response to “Labour Day: the celebration and the struggle continue onshore — and off”