When slippery shipowners cheat crew, whose fight is it? 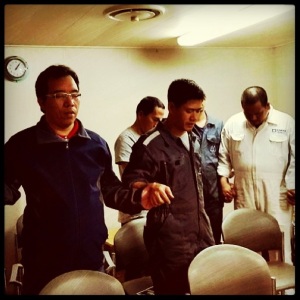 We’ve had it with Flag of Convenience shipping. We’re tired of substandard operators, cut-throat crew managers and heartless ship financiers. Why? The infuriating, distasteful, year-long saga we outline today pretty much says it all: six ships, hundreds of crew living in filth and low on food, cheated of hundreds of thousands of dollars in wages. The only bright spot in the story? The bond of trust and solidarity between those seafarers and the family of ITF inspectors around the world, fighting hard to support them.

We believe that it’s well past time for the shipping industry to get its sorry act together and show appropriate responsibility to crew, coastal communities and the marine environment. Our story shows that no such thing is happening.

The tale starts in Vancouver and will ferry us to South America, through the Panama Canal and all the way north to Philadelphia. It travels a long distance, as far as Australia, but it never ends. It’s the story of the ITF’s global inspectorate team joining hands to support the many crews of a single, derelict ship manager: Keymax Maritime.

Pour a coffee and settle in for the read…

We begin by noting that the economics of shipping are extremely complex. Buying and selling ships is riskier than the Shanghai stock exchange these days; ship financing and mortgage and chartering structures are always a bit of a gamble. The shipping markets rise and fall just like stocks — and the swings can be wild.

Japan’s Keymax Maritime, the villain in our tale, is a company that probably gambled wrong. Traditionally, it was a ship-management company that also supplied and maintained crew for other owners. Then it started to buy ships for itself. While it is hard to determine its actual size, the company has at least 125 ships and employs 2,500 seafarers. Has that growth worked? We don’t have all the details, but we can clearly see that it’s all gone wrong for the Keymax empire. More importantly to us, it’s all gone wrong for the seafarers who crew their fleet.

Our story opens about three years ago, when ITF Canada Coordinator Peter Lahay was tipped off about a problem during a routine labour inspection aboard a Keymax ship in the Port of Vancouver. As Peter was leaving the vessel, a group of ship’s officers gathered at the gangway to intercept him. They explained that the company’s mandatory contributions to the employee pension plan (set up by the All Japan Seafarers’ Union) were about two years in arrears. When Peter got on to the company, Keymax confessed it was having trouble meeting its pension obligations, but promised that any retiring officer would be taken care of.

Aware of the company’s financial problems, whenever Peter would then inspect a Keymax ship, he would ask about the status of payments to the crew, about leave pay and “home allotments” (the portion of wages sent home monthly for support of family). By consistently asking about these payments, Peter showed crew that he knew what was going on. And that gave them the comfort to come forward and begin informing him that it was not just pensions that were behind, but also ship-board pay, family home allotments and leave-pay payments.

In other words, financial problems were escalating.

In June of 2014, after being contacted by crew aboard Keymax’s Ultra Lanigan in Vancouver, Peter determined that crew were owed $109,000 US. When approached with the evidence, Keymax admitted it was in dire straits — but said it was taking steps to get out from under a crushing debt owed to the banks that held mortgages on the ships it had purchased at the wrong time in a weakening market.

At the same time, another source indicated to Peter that whenever payments were made by charterers for movement of freight, the banks and creditors would immediately swoop in and take the lion’s share of revenue. It looked like everyone was nervous of a default and bankruptcy.

The ITF called in Transport Canada about the wages owing, and TC issued an official deficiency that could have resulted the vessel being detained under provisions of the MLC. But knowing that the company was in trouble, and not wanting to send them over the edge, the ITF worked out an agreement with Keymax that would see the crew paid all wages owing at the next port, which was in Thailand. And they were paid.

The next chapter opened on New Year’s Day of 2015, when Peter was contacted by crew in Vancouver aboard a small Keymax-crewed bulker called the Ocean Seagull. His investigation determined that crew were being shortchanged every month and the total had hit nearly $24,000 US. Not wanting to delay the vessel, inspectors decided to have it met at the next port of Grays Harbor, Wash., by US West Coast Coordinator Jeff Engels. Crew were paid out there.

Weeks later, on Jan. 18, Peter was tipped off by Chilean Inspector Juan Villalon and LA Inspector Stefan Mueller-Dumbois  that Keymax’s  Nord Explorer was heading north with unpaid crew. The vessel was to stop in Stockton, Calif., and then in Vancouver, where the crew would be owed nearly $150,000. The ITF managed to scare the owners into bring a tranche of $50,000 aboard at Stockton by threatening to invoke the Maritime Labour Convention. By the time the vessel arrived in Vancouver, a total of $106,480 had also been dropped into the families’ home-allotment accounts.

The Nord Explorer set sail for South America and then Philadelphia.

Word of the settlements on the Ultra Lanigan, Ocean Seagull and Nord Explorer may have spread through the fleet grapevine. Throughout the year, Fusao Ohori, ITF Coordinator for Japan, was keeping a running list of complaints pouring in to ITF inspectors around the world, was tracking any settlements and was pressing Keymax from his end. Some vessels appeared on the list of ships in arrears over and over again.

It was not long before Peter heard from crew of Nord Explorer again. By now, many of them were emailing him daily, often sharing photos of shipboard life. Because lines of communication were wide open, information about problems was shared. Peter was able to press the owners to pay four crew, who had completed their contracts at the Panama Canal, before they went home – something that might not have happened without near-daily communication. By keeping in touch with the crew, Peter was also able to have Barbara Shipley, the ITF inspector for the Newport/Philly region, obtain $39,995 owed crew working aboard when they arrived in Philadelphia.

But the problems went way beyond unpaid salaries. Near Newport, the wires on a “grab” (massive bucket) full of salt parted from the ship’s crane and the grab fell to the bottom of the near-empty cargo hold, causing extensive cracking to the hold – and raising questions about shipboard maintenance budgets. Then, while under command of a pilot, the vessel grounded after leaving Philadelphia and required drydocking for temporary repairs before the passage to Japan.

As was now their habit, crew were sending Peter updates and photos as all this unfolded. Photos of the broken grab and cracked hold and close-ups of cracks on the bottom of the hull from the grounding were shared among men who had by now become friends.

The inspectors followed the crew through their passage to Japan and repair period at Hiroshima. Before leaving drydock, crew reported that wages had once again fallen behind. Many of the crew were due to leave the ship for repatriation to the Philippines. But they stood firm, refused to leave drydock until paid – and with the inspectors’ help, collected $113,967 in wages and leave pay owing them.

So … a happy Keymax ending? Sadly, no. The beat went on.

Last month, before the Nord Explorer had even arrived in Japan, Peter was contacted by a seafarer’s ministry in Vancouver to advise that the crew of Keymax’s Nord Trust was in port and that their salaries were a month-and-a-half late. With the vessel about to depart for Chile, Peter contacted Fusao in Japan and Juan in Chile. He wrote once again to Keymax Maritime to demand that crew of the Nord Trust be paid when they arrived in Santiago. With persistent help from both Fusao and Juan, the crew did indeed collect $42,000 when they docked in Chile.

And then the focus moved to Australia.

At the same time as all of this was unfolding in North America this year, an identical story was playing out there. In January, 21 Filipino crew aboard Keymax’s Bulk Brazil in Port Kembla sat cheated of four months’ pay as food supplies ran low. Six months later – which brings us to last week — in the Australian port of Gladstone, another Keymax crew aboard the AOM Milena now sits with eerily similar complaints: wages months in arrears, food running out, living and working in filthy conditions.

As the ITF in Canada, it is impossible to assemble accurate worldwide totals on Keymax ships and monies returned. At one point alone, there were 18 ships on a list drawn up by just one of our inspectors. Crew affected number in the hundreds; through the hard work and dedication of ITF inspectors joining hands around the globe, we have helped return several million dollars to Keymax crew and their families — backstopped by Fusao Ohori in Japan.

There is a clear lesson in this story, both for crew and for ITF inspectors: We must work together, and we must trust one another.

As inspectors, we need to help seafarers build a trade-union mentality, to be part of the solution when faced with rotten ship operators. Once we have an organized workforce at sea, owners will not be so ready to cheat or “forget” to pay their workers, and they will take the ITF and its affiliates more seriously.

If we are going to eliminate substandard shipping, seafarers have a role to play too. We cannot win this campaign by continuing with an outdated, paternalistic model of simply using crew to punish owners. Crew must also act for themselves, with our support.

We truly are all in this together.

One response to “When slippery shipowners cheat crew, whose fight is it?”