The Age of Aquarius? What a tragedy for Canada 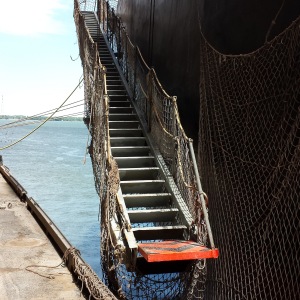 How would you feel about hopping the gap between  the dock and this unsecured, unguarded gangway — if  that safety net wasn’t there?

From time to time, we feature ITF inspectors from Canada talking about their cases in their own words. The stories illustrate key issues for us: risk to human life, to the welfare of crew and their families, and sometimes risk to Canada’s marine environment and security.

Today we feature Vince Giannopoulos, who works the Great Lakes/St. Lawrence region, on his inspection of the tanker MV Chemical Aquarius in Montreal this week:

“Safety and security. These words are often used together, but it is important to remember that they are two very different words, with very different meanings.

Safety is defined as the condition of being protected from danger, risk or injury. In any industrial work environment, safety is of the utmost importance, and standards are set very high. Security, on the other hand, means being free from danger or threat. The nature of the maritime industry dictates that ships must also comply with very high security standards at all times.

Last week, as I approached a ship in the Port of Montreal, I witnessed the absence of any standards whatsoever – not safety, not security. I looked over at the gangway, which sat about  two feet above the dock with no save-all (the net that’s supposed to hang underneath to catch anyone who might fall). As I stood there debating whether or not to risk going up, I called over to try and get the attention of someone on deck who could lower the ramp and make it secure before I boarded. But there was no one to hear me. I cautiously climbed on board and looked around, but there was still not a body in sight to fix the gangway, let alone sign in any visitors.

Spend a day in a Canadian port and very quickly you will see a theme emerge. Security seems to be the number one priority. Always when visiting ships, there is more than one security checkpoint you must pass before ultimately boarding the vessel. That’s why I was so surprised that I was able to saunter over to the tanker vessel loaded with more than 5,000 tonnes of gasoline, hop on the gangway and make my way all the way upstairs to the captain’s office without being stopped once — or even looked at by anyone. When I got to the captain’s office, he was no doubt surprised to see me there, and asked for a few minutes before we began reviewing the ship’s and crew-employment documents.

So I walked down a couple of decks, had a cup of coffee in the crew mess and began to read the local paper, surely left behind by either a dockworker or perhaps the agent. As I skimmed the paper, I noticed articles on some of the biggest issues facing Canadians today — things like Bill C-51 (Canada’s terror legislation) and trade deals like CETA — and the controversy that surrounds them. I didn’t get a chance to finish reading before being told the captain would see me, so I made my way back up. The first thing the captain told me was that he was transporting cargo between two Canadian ports. I was surprised. Like most seafaring nations, Canadian cabotage (the movement of cargo between two domestic ports) is protected by legislation found in the Coasting Trade Act.  To be operating in these areas with a foreign flag, the vessel requires a licence exempting it from the requirement to be Canadian-owned, flagged and crewed.  All crew also need “waivers” approved by the Canadian government allowing them to work.

It was then that the irony of the situation really sank in.

Minutes before, I had read news stories in which our government expressed the importance of Canadian jobs and Canadian security — and there I sat, on a ship I was able to board with no checkpoints of any kind, looking at a certificate issued by the very same government of Canada, granting the ship a month-long permit to operate in our waters.

The only way for us to prosper as a seafaring nation is by enforcing the standards we have set for ourselves in Canada, and the only way to truly tackle the issue of the safety and security of our Canadian workers is by ensuring the Maple Leaf is the flag flying proudly from those ships. We don’t get that in a world where standards take a backseat to profits, along with the welfare of the crew and the lives of their families.”

The issues Vince highlights are startling. If there is one thing Canadians will forever remember about Harper’s Conservative government, it will be the constant drone of “safety and security” and the threat to the lives of Canadian citizens posed by terrorism. (This despite the fact that more people will die from food poisoning than terrorism in Canada in 2015, due to lax regulations and enforcement.)

But here we have a tanker full of gas, flying a Hong Kong flag, crewed by Indian nationals earning as little as $3 an hour, the ship managed by a company in Singapore and chartered out of Cyprus, where the first thing you would notice is how old these ships are.

We have no quarrel with the crew. They are from a still developing country and like all Canadians, they just want to work, enjoy the benefits of that employment and care for their families. But the crew of the Chemical Aquarius is not from Canada; they have no connection to our waterways and coasts, their families do not live in our coastal communities and will not be affected by any mishap that might occur in such circumstances.

The reason that port and ship security is meant to be taken seriously is because of the threat that ships can pose to communities, the environment and to commerce. After 9/11, at the insistence of the United States, the International Maritime Organization drafted international security regulations for commercial shipping. These regulations are known as the International Ship and Port Security Code. All trading nations were meant to adopt them, and Canada has.

Our own regulations, which give effect to ISPS, are known as the Canadian Marine Transport Security Regulations (MTSR).

These regulations are meant to be taken seriously by vessels in Canadian ports and by the ports themselves. Each port is required to have a marine facility security plan. When a vessel comes along the dock, there is a requirement that the port and the ship exchange their security plans and ensure each is informed of the provisions that keep the vessel and the port secure.

Clearly, in this case Vince describes, the vessel was not in compliance with the MTSR or ISPS. Vince could climb aboard, was not challenged at the top of the gangway and was allowed to wander all over the ship without being stopped.This was a breach of international and Canadian regulations — and highlights the lax standards FoC ships operate under.

As well, his story makes an important point about the Coasting Trade Act provisions and the licences issued by the government. Our experience shows that such exemptions are handed out like candy at a picnic these days — and the largest single applicant for such waivers is the oil industry.

It is an absurd irony that the Federal Minister of Public Safety is the issuing authority to allow foreign-crewed flag-of-convenience gas tankers to operate in the Canadian domestic market. Harper does not want a Canadian oil and gas carriage industry to develop. His government repeatedly allows foreign tankers into coastal trade on the Atlantic Coast and the St. Lawrence. The oil and gas industry are not interested in bringing value to Canadian communities either; their goal is to extract maximum profit with the least amount of effort.

So the next time you hear Steven Blaney — the Conservative Minister of Public Safety and Emergency Preparedness — or Harper himself go on about public safety, remember that they are the ones bringing into Canadian maritime trade the flag-of-convenience, foreign-owned and chartered oil, chemical and gas tankers crewed by exploited workers earning as little as $3 an hour — ships that don’t adhere to the highest standards of safety and security.

Consider this:  there have already been two significant collisions by FoC ships in the St. Lawrence this year. On June 18, the Bahamas-registered cruise vessel Saint Laurent slammed into a lock and began to sink. On June 21, the Cyprus-registered Tundra ran hard aground near Lancaster, Ont. Both of these incidents followed the oil spill from the Cyprus-registered, Greek-owned Marathassa at English Bay, Vancouver, on April 8.

Age of Aquarius? Love may steer the stars, but only Canadian seafarers on Canadian-owned and regulated vessels will steer us to safety.

4 responses to “The Age of Aquarius? What a tragedy for Canada”